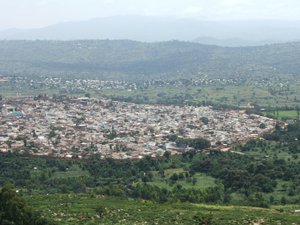 "From Addis we headed to Harar, another 10 hour bus ride. Harar is different to any other Ethiopian city, a walled town, with over 360 twisting and winding alleys squeezed into 1 square kilometre, it is similar to the medinas of Morocco. Harar is the Islam capital of Ethiopia and is crammed with mosques, colourful markets, coffee shops and crumbling walls. It is colourful and photogenic and the Adare (Hariri) women's dresses and head scarves are particularly colourful and exotic."

"The people of Harar are known for their hospitality – strictly not a cliché as you will shortly find out on your arrival. They have a reputation for having a laid back life style with a strong sense of sharing and a desire to help others. Harar is a place where you start conversation with a stranger and end up in their friend’s house for an afternoon session of chewing chat. For anyone who intends to have a good time with the people besides touring the historical sites of the city, participating in such social gatherings is easy to do. The chat ceremony would be very informative of the values, norms, mind setup and other cultural elements of the people besides giving one the chance to checkout the food and house settings. Harar is also renowned for its coffee that has become an international issue of interest with the patent right case involving Starbucks."

"The most spectacular part of the cultural Heritage is certainly the traditional Harari house, whose architectural form is typical, specific and original, different from the domestic layout usually known in Muslim countries, although reminiscent of the coastal Arab architecture. Their style is unique in Ethiopia and their interior design quite exceptional. When Harari people mention the “Harari culture” they actually refer to the beauty of their houses, which they are very proud of. At the end of the 19th century Indian merchants built new houses whose wooden verandas defined a different urban landscape and influenced the construction of Indian/Harari houses. Their architectural and ornamental qualities are now part of the Harari cultural heritage. The city is very well preserved, and few modern buildings have damaged the traditional architectural typologies."

"Harari women weave basketry bowls and lidded vessels that serve important functions in the ceremonial and everyday life activities of the Harari ethnic group. The traditional shapes and complex patterns found in Harari basketry, which are arduous to create, are locally revered for their aesthetic qualities and also for their roles–real and symbolic–in communicating common values among community ."

"Spotted hyenas could be considered the most hated mammal in Africa. Decried as ugly and awkward, associated with witches and sorcerers and seen as contaminating, spotted hyenas are a public relations challenge of the highest order. Yet in Harar, hyenas are not only allowed into the town to clean the streets of food scraps, they are deeply embedded in the traditions and beliefs of the townspeople."


The above are excerpts from books, and researches found in this website. Please Browse and enjoy this enlightening experience!!!